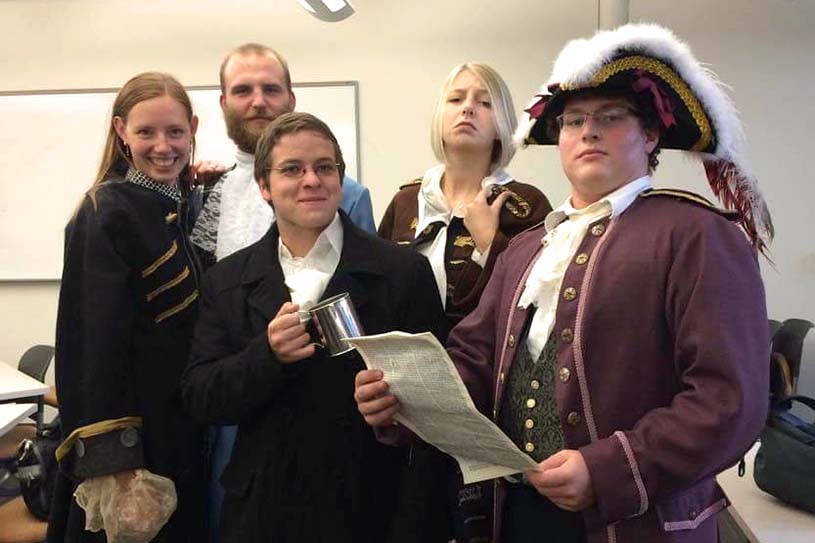 For most people, hearing “There’s a goat in the classroom” would be reason for considerable alarm. But for those participating in the recent Special Topics in History course (History 305: The Creation of Democracy), it was only a slightly more out-of-the-ordinary occurrence than usual. It was an atypical course in which unexpected things happened, and we are hoping to make it a key part of our curriculum.

Thanks to some generous support from the Cole Foundation for Renewing the Culture, we were able to offer an experimental course focusing on the foundations of democracy during the fall term of the 2015-16 academic year. Part of the Reacting to the Past (RTTP) movement, this course involved students playing two role-immersion games set in historical moments of crisis: the Constitutional Convention of 1787 and Athens in 403 BC.

In these complex role-immersion games, each of which lasted several weeks, students became individual historical characters who needed to make group decisions. In 1787: how large should the U.S. House of Representatives be? Who should elect U.S. senators? In 403 BC: should Athenians forgive those who supported the previous oppressive regime? Should Athens be ruled by its citizens or by elites? The expectation is that the resulting student-run debates, negotiations, and compromises result in a deep learning experience.

That deep learning experience does not occur just because of the topic or ideas but because of the role-playing factor. The idea in any RTTP course, as reflected in the recently published book Minds on Fire, is that when students take on a role, one or more of three elements come into play: imagination, competition, and absurdity.

First, imagination: Just like taking on a character in a theatrical production, immersing themselves into someone else’s world allows students to think differently.

Competition: These games involve winners and losers. It is most often the competitive element that encourages students to pay more attention and exert more effort than they might otherwise.

Absurdity: Students often dress the part, strange things happen in the games (like goats), and they have fun.

The course was fun for the instructors as well. We enjoyed watching the debates and hearing about the after-hours team meetings, but it was also fun because it highlighted academic principles that we hold dear. In order to succeed in debates, students had to engage and wrestle with foundational texts such as The Federalist Papers or Plato’s Republic. They had to condense their arguments into concise papers on specific topics, use those papers to inform their speeches and debates, take into account the arguments in other students’ papers, and operate as part of a team in pursuit of goals.

As one student put it on an end-of-course evaluation: “In this class, I’m not just inhaling facts to exhale them on a test. I’m researching, investigating, and digesting the facts.”

We plan on offering one of these courses every year in the history and social sciences department. Next year, the planned theme is that of revolution. The first game will focus on loyalists and patriots in New York City in 1775 and 1776; the second on Paris of 1791 in the midst of the French Revolution. Students playing these games can expect to become familiar with the writings of Thomas Paine, John Locke, Jean-Jacques Rousseau, and Edmund Burke.

We hope that the courses continue to be enjoyable for all involved. We hope that students again engage in deep learning. And we hope for more as well. Beyond the fun and the student engagement, we think there are two key attributes of these courses that make them the perfect fit for a New Church institution of higher education.

First, one of the key themes in our curriculum is that of human choice, rooted in the first law of divine providence. Human beings are free to make choices about what to believe, how to act, and how to respond to their circumstances. RTTP games call attention to this point because they highlight that history did not have to unfold as it did. The events of the past were not pre-determined, but were shaped by the choices that people made within the circumstances and conditions in which they lived. While the students need to play their roles in historically appropriate ways, within these roles they wrestle with decisions and make choices about what to do. They can—and sometimes do—create different outcomes than what happened historically because of how they understand, present, and weigh the multiple considerations at play.

Second, Swedenborg’s theological writings suggest that our rational ability—the key human capacity to distinguish between good and evil—begins to be opened by means of civic and moral truths. Ideas about justice and equity, considering the perspectives of other people, and reflecting on the morality of certain ideas and actions are the central elements of RTTP games. The rational capacity, however, does not form or open simply by knowing civic and moral truths, but by living them. And while we don’t suggest that taking an RTTP course is the same as living civic and moral truths, we will say that it is a step closer to the real thing than just reading about them.