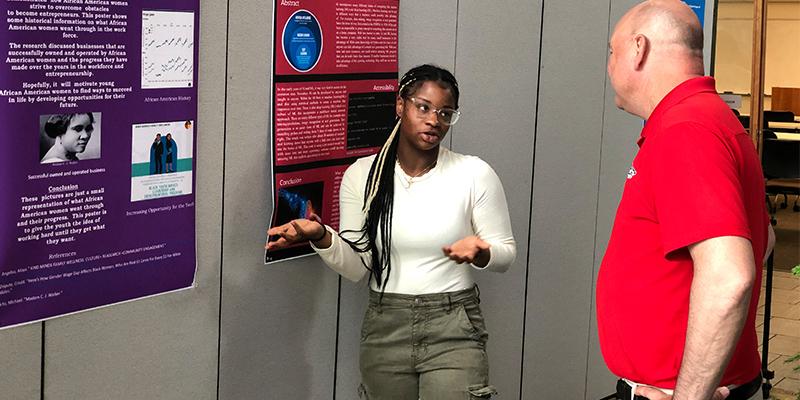 Bryn Athyn College hosted a reception for soon-to-be graduates to share their experiences and research of their Senior Capstone projects with the broader community on Thursday May 12th, 2022. The students were assigned to explore an area that interests them within their major field. This big undertaking is a chance to showcase aspects of what students have learned in their college education in the form of a research paper and presentations. The event offered an opportunity for College community members to learn about these projects from the students, and celebrate their mountainous hard work.

Projects spanned many majors and touched on a variety of topics such as the connection between gut microbiota and mental health, the necessity of choice in small businesses, storing digital data in DNA, internalization of evil and video games, gene therapy for immunodeficiency treatment, and many more intriguing subjects.

Alisha McKnight chose to dive into the world of Black businesswomen in her project “Black Women Entrepreneurship: Increasing Opportunity for the Youth.” She found inspiration in learning about Black business owners, and felt it was important exploring the adversities they had to overcome. Alisha notes as a highlight for herself was, “just finding out about women like Madam CJ Walker, successful woman that paved the way for the younger generation millionaires, because a lot of people expect woman to fail so it's amazing to see Black women succeed.”

For biology student Liam Elphick, whose project entitled “Optimal Therapy Treatment for Adolescent Idiopathic Scoliosis Patients,” his topic gave him a chance to explore a physical condition that effects him, personally. “I have scoliosis,” Liam explains. “So to learn information about myself, but then also how the different treatments are so all over the place–because there's no one set treatment as of right now besides surgery–it's interesting to see all the different aspects to it that I wasn't expecting.”

Similarly, Terraé Lewis’ project on “Unfair Treatment of Women Athletes in Intercollegiate Sports” had a personal touch, “I'm also an athlete who’s a woman at the intercollegiate level. I've seen the discrimination within that and equality within it, so that allowed me to have a connection with my paper and write something that I can relate to and that I see often.” During her research, a key example of her topic was in national headlines. The US women’s soccer team won their suit against the US soccer team for discrimination, which was exciting on a few levels, “It was real time watching the things that I’ve been researching.”

Michael Varley was inspired to explore his topic “Standing Tall Against Anxiety: The Body’s Effect on Experience” by the intersection of multiple fields. “I was really intrigued by the mind body connection and how mental health and physical health relate to each other,” he says. He began to look deeper into the viral Ted Talk by social psychologist Amy Cuddy on the debated theory that standing in a Superwoman-like power pose can increase feelings of confidence. “That what they were claiming–to bring people from a neutral disposition to positive–wasn't really conclusive. But I did find that people who were, let's say, anxious or depressed individuals, you could bring them from a negative to more of a neutral. You could make those people feel a little bit better. So that's primarily what captured my attention.”

Human society major Derek Cronlund’s poster is quite striking with images and the headline “Enemies Foreign and Domestic: An Exploration of Nazism in America.” His topic took form when Derek was taking a course with professor Sean Lawing, Ph.D. on Nazi Germany when they explored the German American Bund. “Nazism that is so foreign to the basic predicating ideas of America," Derek explains. “So how does it become palatable to a certain portion of the population and sell so that there are people who actually follow it? How do you get these things that seem diametrically opposed to apparently work together into a singular movement?”

Bryn Athyn is proud of all the students who have worked so hard researching and presenting their projects.