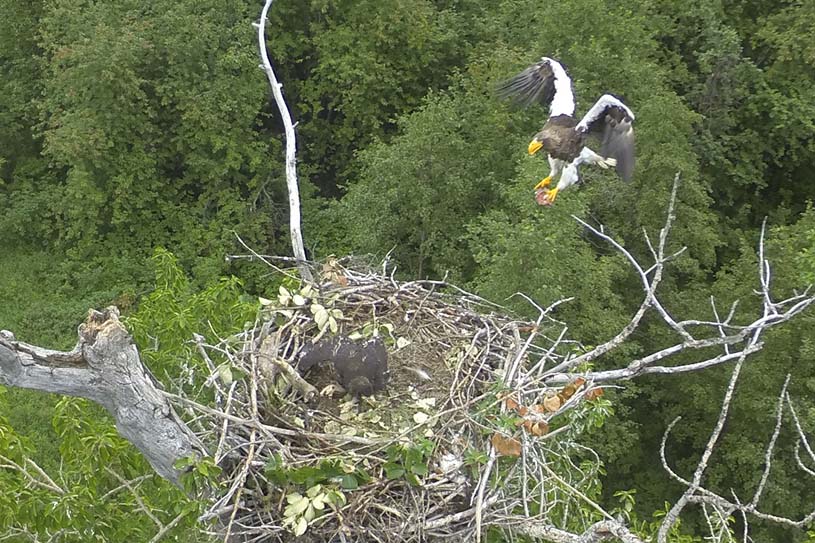 Bryn Athyn College professor Eugene Potapov, Ph.D., recently returned to campus from his ongoing research in Magadan, Siberia. For the past 25 years he has been trekking to that far corner of the world, where rough seas, inclement weather, and the ever-present possibility of bear interactions create an exciting, if not exactly comfortable, environment for his research on Steller’s sea eagles.

The focus of Potapov’s research has evolved over time, as has the equipment available to him and his team for collecting data. For example, to study breeding performance of the Steller’s eagles at the beginning of his research, Potapov would spot a nest (always in the tallest of the surrounding trees), and climb to the very top in order to observe the nest and keep track of the eggs therein. For this kind of ascension, his climbing equipment was a vital part of the process. Once at nest level, Potapov could observe the contents and climb back down. Parent eagles would stay away while he did this, perhaps making the task a bit less stressful for Potapov, but also limiting his ability to see how the parent eagle behaved or interacted with the eggs and eventually the babies in the nest. Now, with cameras attached to drones, he is able to observe not only the quantity of chicks, but the behavior of adult eagles with their young. The use of drones in his research also allows Potapov to document more nests more quickly, greatly improving his time efficiency.

Other must-haves for his research include gyroscopic binoculars, an inflatable dingy, and GPS. As Steller’s eagles live along river and sea coastlines, researchers are always boating from one location to another and spotting nests from their waterborne vessels. With the constant and sometimes violent undulations of the water beneath them, researchers require an observation tool that stays steady despite the swells and heaves. Gyroscopic binoculars instantly adjust and stabilize the image to compensate for motion, allowing researchers to get a good, steady look at far away objects.

The inflatable dingy is another essential item for Potapov, as the boats used to navigate from observation point to observation point can only go so close to the shore, especially when rough weather makes the beach or bank landings difficult. Trying to off-board directly from boat to land would pose a threat to the safety of those on the vessel, and could result in major damage to the watercraft. In fact, landing aside, the maneuvering of the boats in the open water is tricky enough.

Thick fog and sudden storms are realities of the research area that Potapov and his team must navigate. The Sea of Okhotsk, nestled against the Siberian coast north of Japan, is the coldest sea of East Asia with Fahrenheit water temperatures averaging in the 40’s during the warmest summer months. Whereas ice floes are present in the sea throughout the winter, the main navigation impediment in the summer, when Potapov and his team conduct their research, is dense fog. Hence, Potapov and his team rely heavily on GPS to get them safely to their various destinations. For example, when entering an estuary during low tide, the team sometimes can’t see the edges of the channel, but with the aid of GPS they can safely navigate the waterway.

With all of the perils involved in this research, why does Potapov continue this work? He says it’s about “the question mark.” As he gathers information and finds answers, new questions arise. It’s the curiosity and the unknown that keep him motivated. Potapov presented the results of his summer research at a public meeting of the Delaware Valley Ornithological Club (est. 1890) at the Academy of the Natural Sciences of Philadelphia on September 15, 2011. This year he, together with is co-authors, Drs. I. Utekhina, M. McGrady, and D. Rimlinger, is going to give an oral presentation at the Wildlife Society 23 Annual Conference in Raleigh, NC, October 15-19 2016 entitled: “Impact of Global Warming on the Steller’s Sea Eagles (Haliaetus pelagicus) in the Northern Part of the Sea of Okhotsk.” For more information on Potapov’s research, visit his blog page.