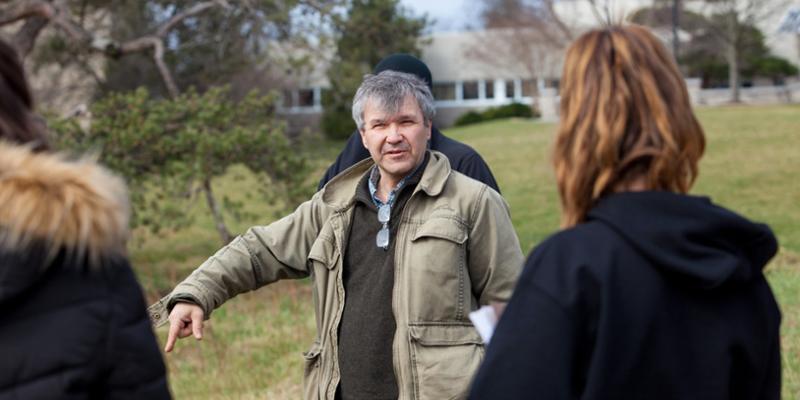 Bryn Athyn, Pa.—In recent years, extreme winds, flooding and deadly heat waves have created a sense of urgency around climate change, especially for those living in vulnerable places like Florida’s southern peninsula. In the wake of these natural disasters, Bryn Athyn College Professor Eugene Potapov was invited to speak at Florida’s eleventh annual climate leadership summit in December. This conference featured keynote speakers and panels with local, state, and federal government officials, business and nonprofit leaders, and other experts from around the world all gathering to promote a more sustainable earth.

At this summit, Dr. Potapov spoke alongside his friend and long-time colleague, the internationally-renowned Dr. Sergei Zimov about the impact of melting permafrost, and its role in earth’s changing temperatures. Dr. Zimov, an arctic ecologist who specializes in permafrost, founded Pleistocene Park, a 35,000-acre field in Siberia.

As the CEO of Pleistocene Park Foundation, Dr. Potapov helps spread awareness about the park’s paradigm-shifting initiatives for sustaining the earth’s ecosystem. He also helps finance and arrange the shipping of live animals to the park, such as horses, musk ox and sheep, with the goal of keeping carbon locked inside the earth, and preventing a massive melting of the ice under earth’s crust.

The park has continued to garner attention among the scientific community, and has been featured by National Geographic, the Atlantic, the New York Times, and most recently in July, a 60 Minutes special on CBS News.

Dr. Potapov’s and Dr. Zimov’s lecture was moderated by Dr. Robert Max Holmes, Deputy Director of the internationally-acclaimed Woods Hole Research Center. Dr. Holmes introduced the talk by playing a clip from 60 Minutes special. In the clip, the host of 60 minutes flies to the arctic to meet Dr. Zimov, who gives the host and camera crew a tour of the once-frozen landscape that has, in many places, turned to mud. In one scene, the host holds a clump of freezing soil in his hands, while Zimov warns in his gruff Russian accent, “in five minutes, it will be melt.”

In his talk, Dr. Zimov connected with his audience’s concerns: “Where I live in Siberia, people not afraid of global warming. They don’t take it seriously. But this community [in southern Florida], understands why it can be so dangerous.” He added, “If permafrost can melt in our region, it can melt anywhere at any moment.” Dr. Zimov explained how the melting of all permafrost, which could happen in ten years if we make no change, will emit devastating levels of methane gas. This would impact our climate more intensely than burning the entire supply of earth’s fossil fuels — oil, gas and coal.

Dr. Potapov then took the stage, showing the vast difference that he has seen during his decades of research on arctic wildlife. “The study area I selected in 1980 I thought was stable – that I’d be able to see stable observations of wildlife over the years.” The next year, he explained, his campsite flooded. The following year, the entire valley was covered with water. Today, Dr. Potapov’s muddy site makes it impossible to set up a tent, and is surrounded by millions of square miles of water. He explained, “I literally have to travel 200 miles in a boat to get to that original site.”

Though the effects of climate change are clear, Dr. Potopov and Dr. Zimov are working hard to mitigate the damage, and the world is taking notice.

Bryn Athyn College is proud to have professors like Dr. Potapov, who work alongside with our students on the cutting edge of science, helping to create a more sustainable world.