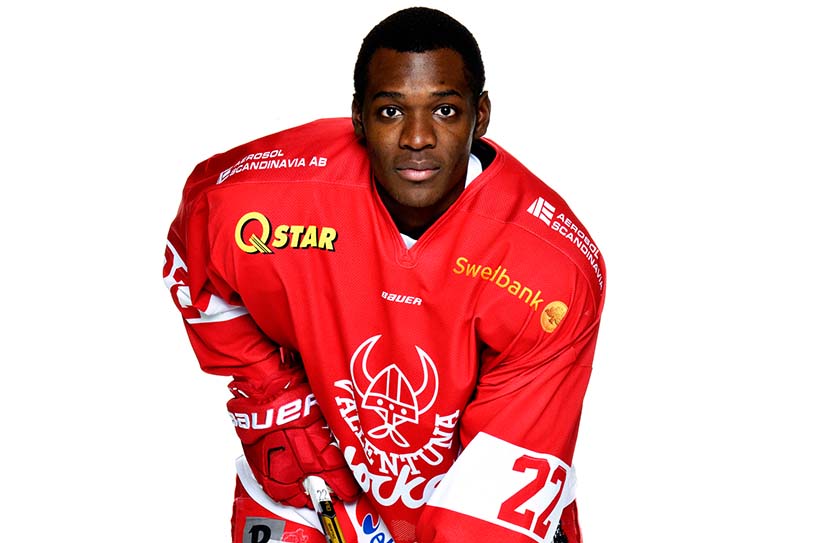 Terrence Johnson is a Bryn Athyn College student who has followed a particularly unique path since graduating in 2015. He currently plays professional hockey for the Swedish team Vallentuna, based in Stockholm. A business and psychology major with a kind heart, a stunning work ethic, and considerable charisma, Terrence was perhaps always best known on campus for his athletic prowess. Bryn Athyn College hockey not only benefitted from Terrence’s considerable speed and skill, but the program was undoubtedly enhanced by the leadership he provided throughout his college career. His talent and discipline have brought him to this exciting Scandinavian adventure, and when we caught up with him he let us in on what it’s been like to transition to playing professionally in a new country.

BAC: How on earth did you land a contract with a professional hockey team in Sweden?

TERRENCE: Well, as you may or may not know hockey is very small sport and you tend to keep connections with the people you meet. I once played for an organization called Team Maryland. During my last year with them we had a few Swedish people come to our program and through them I learned a little bit about the way things worked over there. Since hockey is such a small world you tend to keep track of the people you meet and play with. In this case Facebook was instrumental. Fredrik, one of the Swedish coaches from that program remembered who I was and got me a spot. Of course I also had to send over highlight tapes and a resume, but if it wasn’t for him I would not be playing. I had actually emailed Vallentuna about playing for them before, but at the time I did not have any representation to even be considered. Fredrik helped out a lot. I also received help and support from Danny Triesler (BAC 2014), as he told me what he did to get his contract. Basically, I had to email every European team and league in existence– a time consuming task, but it worked for Danny and it gave me hope. Coach Burke (BAC head coach) helped out in a different way. He was there for support. It is a devastating feeling to be 90% through summer and still not have a contract when the people you train with have had one since the beginning or middle of the summer. Having him there giving me encouragement amidst all my doubts kept me in a stable position to keep maximizing my effort to play professional hockey.

TERRENCE: Adjusting to life in Sweden was difficult at first, but things seem routine now. We are six hours ahead of the Eastern Time zone. Aside from the cost of living, one really great thing has been that the people of Sweden and my teammates all speak English and have been very good with trying to understand me speaking Swedish.

BAC: What’s it like being away from your friends, family, and the things from home that you love?

TERRENCE: I must say that skype, texting, and phone calls help. But there is nothing like actually seeing someone. There are no Chipotles and Chick-fil-A’s here, so that is heartbreaking in itself in terms of food.

BAC: How did playing for BAC contribute to your current hockey success? Terrence: Playing on the hockey team at BAC prepared me for this moment in a very different way than most would think. Yes, scoring goals and winning is fun, but that is not what prepared me for Sweden. Playing at BAC humbled me and showed me how to be an effective leader. Upon entering BAC I was not the most humble person you have ever encountered, but over the years that changed drastically. Once I learned what was needed of me as a student, hockey player, and community member, it was a change that I had to make for myself. That change is part of the reason why I am here today, with a big emphasis on humble pie. Being good at hockey only gets you so far, but if you want the full support of your teammates and others then you need to open yourself to constructive criticism and thrive from that.

BAC: Do you find that your academic, social and spiritual experience at BAC has been useful to you, either as practical preparation or support in this new endeavor?

TERRENCE: Yes I think having a broad experience at BAC is helping me a lot with my transition in Sweden. There is so much diversity at the college and there are so many international students who have traveled thousands of miles to be in a small place like Bryn Athyn. As a student it was interesting asking them questions about where they come from and certain customs from their homeland. Now the roles have been reversed. Now I have left my family, friends, girlfriend and my dog behind for a chance to be successful. I believe opening my mind spiritually at BAC has helped me become a better person and it helps me through certain situations that I have faced since moving to Sweden (not necessarily all bad things). Academically, my finance classes are really paying off. Being my own financial advisor here is helping me maintain a sound enough budget to support myself and pay my bills. That’s not to say I haven’t learned anything from my psychology or other business courses, but getting paid once a month really forces you to prioritize what is needed.

BAC: What has been a highlight of your time with Vallentuna Hockey so far?

TERRENCE: The highlight of my year so far is scoring my first professional hat trick. I never thought that it would happen, as I consider myself more of a passer than a shooter. But it was incredible knowing that I am capable of such a thing.

BAC: What would you say to current and future BAC hockey players who have dreams of playing professionally?

TERRENCE: To the current players at BAC who wish to play professional hockey I would say: do not stop working. There is always someone out there better than you. You have to know that and let that fuel your desire to try and improve every day. Playing hockey in college is amazing but to play at the next level you have to literally be at the rink first and leave last. Work on your weaknesses until there are none, and then you improve on your strengths. Never be satisfied just because you may have had a good game or a good season. You always have room for improvement. I wish the best for all of the guys whether they decide playing pro is for them or not. Everyone has the same 24 hours in a day, and the people that make the most of their time are the people to move on.

BAC: Since graduating have you stayed in touch with teachers and friends, and do you still feel like a part of the BAC family?

TERRENCE: Yes! Matt Kennedy, Figge, Professor Bernhardt, Professor Williams-Hogan and many other faculty, as well as people from the community have been in contact and have sent words of encouragement before and during my time here. It means a lot to still have a connection to the school and community. I would absolutely consider coming back to BAC to help out as an alum, or at a camp, or in any other role. When I first saw BAC I never thought I would miss the “Little School on the Hill” as I do know. I am a proud alumnus!

Thanks to all of his continuing hard work, Terrence has met with considerable success already in his professional career with Vallentuna. In his first four games, he tallied seven goals and two assists; no small feat for anybody, let alone a first-time professional athlete in the midst of acclimating to a new country. The following is an excerpt from a Swedish newspaper, translated by our very own Professor Bryntesson (affectionately known around campus as Figge):

“One team that has recently made a significant climb upwards in the standings is Vallentuna Hockey. The team is probably so far the league’s biggest surprise, because their youth and relative inexperience don’t show at all in the games, and the wins against Visby-Roma and Åker-Strängnäs are nothing but impressive. The fast skater from the US, Terrence Johnson, has played a big part in Vallentuna’s success, since in the three games he has played for the team, he has scored no less than six goals [and has also had two assists]. The team is now fifth in the standings, and who would have thought that before the season started.”

BAC’s head hockey coach, Andrew Burke, shared his thoughts on how far Terrence has come. “I am proud of Terrence’s wonderful achievement. He has worked extremely hard over the past couple of years to position himself for this opportunity. Terrence’s work ethic has helped him make an easier transition into the pro style game. His skill has helped him make an immediate impact. Terrence plays the game the right way– he is highly competitive and plays with passion, which makes him hard to play against. He was a wonder to coach because we knew what we were going to get from him on a nightly basis. Terrence matured and grew into a leader which helped grow our hockey program.” The college community echoes Coach Burke’s pride, and we are all excited to watch Terrence’s career progress in the coming years!