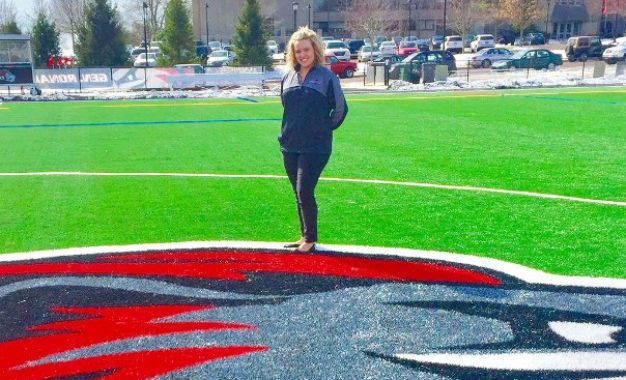 Kathleen Harte Simone, founder and editor of Philafieldhockey.com, interviewed Bryn Athyn Coach Kaitlyn Fitzgerald about the 2017 inaugural season. Reading these excerpts from the Philadefieldhockey.com article gives you an idea of what the culture will be like in this exciting new program!

Bryn Athyn College will roll out their first-ever field hockey program this fall, competing in the NCAA Division III North Eastern Athletic Conference. The Lions are just one of five field hockey programs in the conference including three from New York (Keuka College, Morrisville State and Wells College) and one from Pennsylvania (Wilson College from Franklin County). Kaitlyn Fitzgerald will lead the Lions in their inaugural season. Fitzgerald is a 2009 graduate of Towson University where she was a four-year member of the Division I field hockey team as a defender. She began her coaching career at Wilkes College, while obtaining her masters degree, and has served as an assistant coach at Arcadia University for the past three years. While there, Fitzgerald helped lead the Knights to a MAC- Commonwealth regular season title and was instrumental in recruiting. I caught up with Fitzgerald to find out more about establishing a new program, what she’s looking for in a student-athlete, her goals for the program, the new field, and more.

Your team will assemble in August for the first time. How is the recruiting process coming along? “It’s been a cool process starting from scratch and looking for the right type of player that I feel will make an immediate positive impact on the program. With us being a smaller school, and a first year field hockey team, I have been traveling a lot both in and out of PA to attend high school games and tournaments, and getting many athletes on campus to get our name out there and experience the culture at Bryn Athyn. Not many people have heard of us but once they go through the process and then come on campus, they are in awe of how beautiful and new it is and are extremely interested in our degree programs. The education and athletic programs are unmatched here and I truly mean that. We want to be an integral part of each students’ successes both on and off the field.  It’s also been nice and exciting to have student-athletes from other teams — like women’s lacrosse — express interest in playing for the season. We encourage dual athlete participation to gain the full experience.”

What are you looking for in players?: “I’m looking for the type of player that wants to leave a mark and make an immediate impact on a first year program — a player with a strong work ethic and leadership qualities. I think it takes a special type of player that looks at a program starting from scratch and sees the direct benefits of wanting to go through that journey. So far I have been very lucky in finding some of those players to lead us to where I envision us going! The energy and positivity of the recruits who are committed so far makes me so excited to be their coach and to help them develop.”