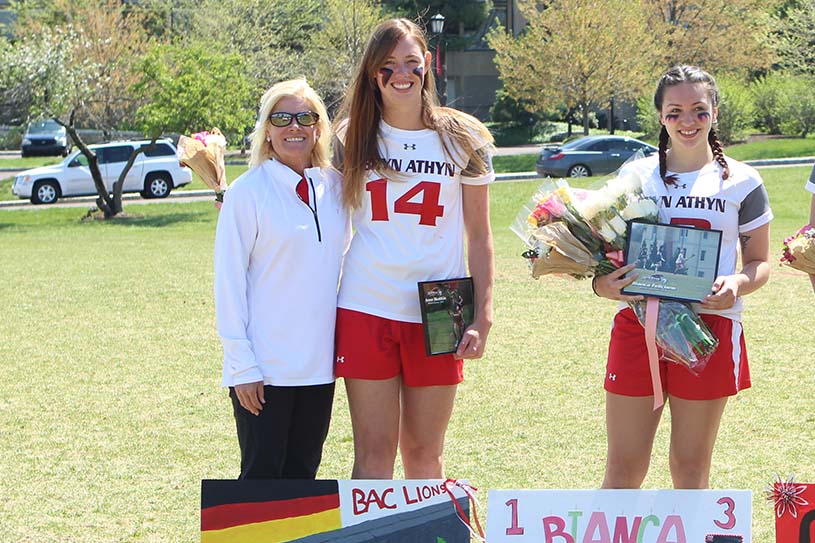 Bryn Athyn head women’s lacrosse coach Denise Roessler is coaching on both sides of the Atlantic this spring. While her season with the Lions warms up, so does her work with the German women’s national team. As one of three assistant coaches, Roessler will attend four two-day training camps in Germany leading up to the July world cup tournament, being held in Guildford, England.

“This is a phenomenal group—so intuitive and eager.” Roessler says that the work ethic and intensity of the German national team is inspiring. She adds, “The tireless effort they put forth is fun to watch. At the end of our last long weekend’s final practice they still wanted to play longer. They weren’t ready to stop because they said they needed to learn more.” And that’s what Roessler is happy to help with. She says that she enjoys being able to support the advancement of lacrosse in Germany, and that she feels lucky to have the opportunity to do so with a team of talented, collaborative coaches and highly motivated athletes.

Roessler’s interest in the German team was piqued by a confluence of factors: she has a healthy dose of German heritage in her family tree, and two of her past players connect her to that country as well. One of the athletes from her St. Joe’s squad spent time in Germany coaching a club lacrosse team. Another player from last year’s Bryn Athyn team was a German exchange student who is now playing club lacrosse there. In fact, she helped Roessler with some of her travel logistics, giving advice on which trains to take and how to make the smoothest travel connections possible.

When asked if more international coaching was in her future, Roessler replied that she was excited to be a part of the training staff for this elite international team, and to be simultaneously building a successful program at Bryn Athyn College. She says, “It’s fun to teach what I know and to collaborate with other coaches. I’m just gonna live in the moment.”