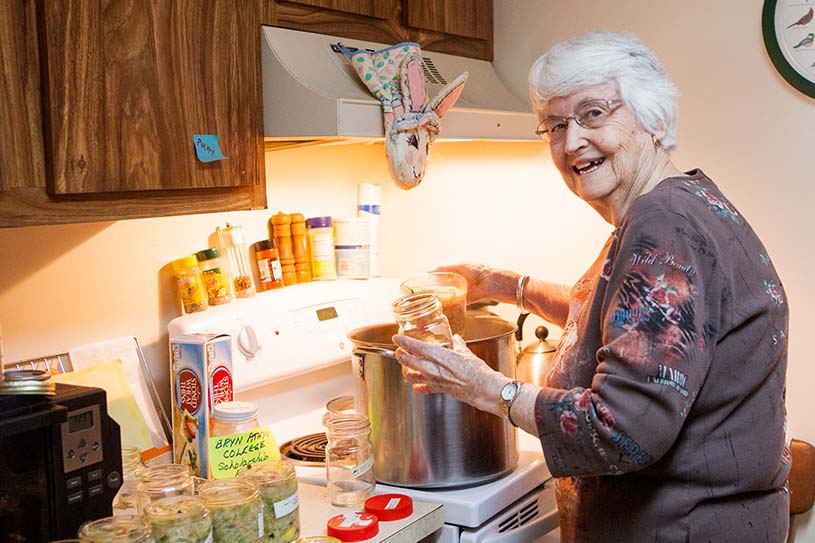 Sure enough, every Wednesday morning a flurry of action takes place in Sylvia’s cozy kitchen: vegetables getting chopped on the cutting board, water running, steam rising from pots on the stove with warm, spiced broths.

Sylvia loves to make soup “or stewp,” as her friends like to call her thick, hearty servings. And as Sylvia says, “When you make soup, you gotta make a lot!” Rather than saving all the soup for herself, she began pouring the extra soup into jars for her neighbors down the hall. People loved the soup so much that they began suggesting that she sell it. So Sylvia responded, “It’s always given freely, but if, when you return the jar, you are moved to put in a dollar, it will be donated to the Bryn Athyn College Scholarship Fund.”

Sylvia had no idea how generously people would respond to this suggestion. With delight in her eyes she said, “We have already raised over a thousand dollars for the College!”

Sylvia’s appreciation for Bryn Athyn College began years ago, in the 1950s. After having been in a New Church school in Toronto, and six years of public education, attending her college classes she felt that she was “coming home.” She felt amazed that the same theme echoed through all her classes—the mostly unspoken sense that every single thing in the universe gives evidence of God. During her freshman year, she wrote to her parents saying, “Everyone here seems to be singing the same song. All the teachers teach from a shared belief in the universal order.”

Sylvia now says, “I came to believe that if you’re thinking from Doctrine, it will come through in everything you do and say. That was one of the best things I got from my education at Bryn Athyn College.”

Sylvia remembers, for example, when one of her teachers drew a number 1 on the blackboard. Then he drew a number 2, and a 3, and so on, and asked the students, “How many more numbers could we add between these?” Without any overt preaching, his presentation helped the students see the infinite amount of numbers between numbers, offering evidence of God’s infinite creation. Sylvia, who had come from the cold northern climate of Canada remembers piping up with, “And negative numbers exist too. I know what 20 below zero feels like. It’s real!”

Sylvia, who graduated in 1957, went on to have a long career in New Church education, including 21 years at her original Olivet Day school in Toronto. In 1978 she became the first founding teacher at the Oak Arbor New Church School in Michigan, which is still running strong. While in Michigan, she earned a master’s degree in curriculum and teacher supervision. Then in 1984, Sylvia returned to Bryn Athyn College to teach and train students majoring in education.

Through all of her years of teaching, Sylvia remained grounded in her commitment to teaching from a deeper awareness of “the Lord’s universal order.” She said, “I know what my goal is when I teach the students. I never say it out loud but I feel that it leads my thoughts and guides my words and methods.  I believe that the spiritual goal in my mind has an impact on the students’ learning. If I’m teaching science, I’m speaking from an understanding of end, cause and effect, and the continuity of creation. If I’m teaching history, I speak from an appreciation of divine providence. If a student is designing a project, I might ask, ‘What use do you have in mind?’”

Very early in her teaching career, Sylvia came across a quote in the Writings that deeply touched her: “The purpose of creation is a heaven from the human race.” She printed the quote on a sign and, from that day on, hung the sign on the door of every classroom she worked in, even taking the sign with her to post on her office door at Bryn Athyn College.

Sylvia points out that it’s not just in the classroom; that “thinking from doctrine” has brought life and meaning to every single thing she does. “It’s the way I structure my life. Whether I’m cooking a meal for a friend, or planning a trip, or saying the blessing before eating, I try to find ways to acknowledge the Lord’s universal pattern in that activity. The marriage of good and truth, or the guiding triune of love, wisdom, and use are patterns that exist everywhere; I feel the Lord’s presence in everything.”

This awe for life has allowed Sylvia to see the beauty in each person she meets. “As I practiced thinking from doctrine, I began to see every child as the Lord’s creation.” With this awareness also came self-acceptance: “I began to see myself as a work in progress. I learned to forgive myself for mistakes I had made—and continue to make!”

Living in Cairnwood Village with many other elderly residents, Sylvia wants her peers to know their value. She said, “Older people have a special wisdom. They might not even realize it. But when they come and join a class or share a dinner table, the sphere of their presence is there and affects all of us.” She added, “We have some older couples, and you see the gentle kindness in the way they treat each other. It is just lovely. That’s a gift to us all.”

Although she has retired from teaching, Sylvia continues to hold gratitude for all she’s received and she looks for ways to give back. For example, by the window of Sylvia’s apartment stands a tall, folded stack of soft receiving blankets that she has been making for an organization called “Birthright.” The organization helps young women who’ve chosen to forgo abortion and give their babies to another family for adoption. Many babies now leave the center with a layette, including one of Sylvia’s receiving blankets. Although she never had any children of her own, Sylvia speaks lovingly about her many nieces and nephews—the greats and the great-greats—including seven who have been adopted.  She said, “It’s a way of paying it forward.”

Today, every baby that’s wrapped in one of her blankets, every person who eats a bite of her soup, every child who has felt encouraged by her teaching, every elderly person who has heard her words of affirmation… all have been touched by Sylvia’s genuine, giving spirit, as well as her enduring belief that “whether we acknowledge it or not, the Lord’s perfect order is in charge, and guiding who we are becoming. It’s everywhere. The Lord’s gifts are boundless.”