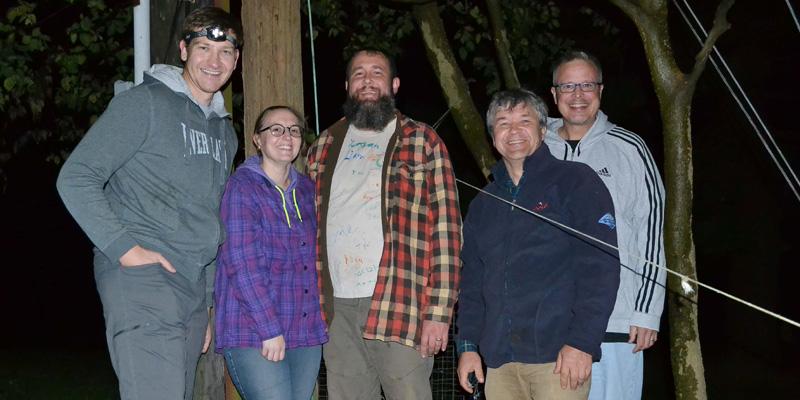 If you live in Pennsylvania, your chance of hitting a deer is about 1 in 60 – higher than almost any other state. To address this problem, Frank Flowers (BS ’22) has been working alongside Professor Eugene Potopov, Ph.D. on Bryn Athyn’s state-of-the-art deer study. For his internship, Frank spent over 10 hours per week working with a computer program called QGIS (Quantitative Geographic Information System), a tool often used by realtors to show property lines, pipes, or water depths. Using this program, Frank uploads a photo from Google earth, and then adds color-coded shapes representing natural features such as grass, water, etc. to reflect the current topography of Montgomery county. Then, by comparing his map to earlier maps, Frank can see ways that vegetation is growing, how water masses are changing, where buildings have developed and more. Finally, by overlaying Eugene’s deer tracking maps onto Frank's QGIS maps, the team can see what parts of nature the deer are attracted to, what they avoid, and how their movement patterns have changed over time, especially as their habitats have been altered by humans.

Though this mapping process can become tedious at times, Frank has found that “it’s like putting a puzzle together. When you see the end product, and it makes sense, then the end product is worth it.” He adds, “That’s something I really enjoy about science.” Learning a new computer program was a challenge for Frank, especially since he’d never used a computer program “except for scheduling” before. However, he found Eugene extremely helpful and patient as a teacher, and Frank now feels much more confident using the technology.

When Frank first arrived at the College in 2019, he got involved with the study in a very “hands on” way. Late at night, he’d trudge into the woods with the team, flashlights shining in the dark, find deer that had been trapped, and help hold them still to get collared with GPS tracking. Through this process, he came to learn more about the deer study, and ways he could help. The team has been able to precisely to track deer patterns of movement, especially the “hot spots” where they tend to jump out, such as specific crash points on nearby Terwood Road. The team has also been studying “habitat disturbance,” meaning the way changes in nature – the cutting down of shrubs, putting up new buildings, etc. – impact deer movement. Ultimately, the more the scientific community understands deer patterns and movement, the more can be done to control the deer population and cut down on tragic accidents.

Frank loves being a biology major at Bryn Athyn College. He says, “I like how Bryn Athyn’s program covers such a wide range, from ecology, to ornithology and zoology.” Frank, who has always been fascinated by animals, particularly enjoys classes with Eugene Potopov, PhD, Figge Bryntesson, PhD., and Grace McMackin, MS.  He says, “It has been not only a blessing to get to work with animals, but also with these great professors who know so much, and to get to work hand in hand with them.”

To any student thinking about getting involved in an internship, Frank says, “You’re in college to learn. So, get outside your comfort zone. Try new computer programs. Read articles, make notes, ask questions. Don’t be afraid to make mistakes. Sometimes it may lead you down a different path that maybe what you’re looking for, but you’ll learn from every wrong turn.”

Frank has been married to his wife, Kelly Flowers since 2018. They met while working as veterinarian assistants, and now live together in Southampton, PA with their rescued calico cat and border collie. As a couple, they feel their marriage has benefitted from the spiritual teachings of Emanuel Swedenborg, which Frank has been studying during his time at the College. The couple is expecting their first daughter any day now.